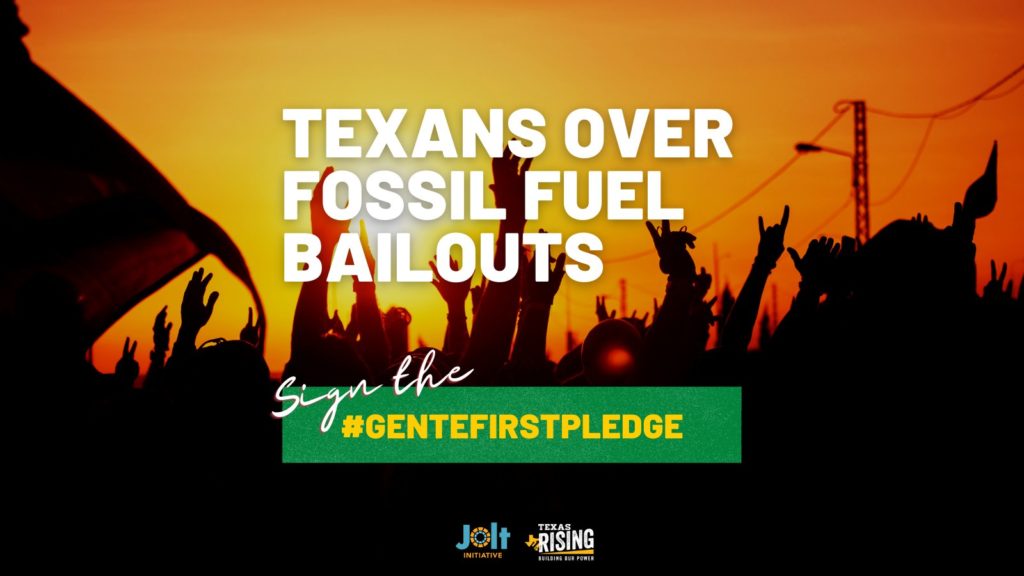 As States Grapple with Stimulating Their Economies, Campaign Kicks off With Pledge to Protect Working-Class Texans

The campaign, called Gente First: Texans Over Fossil Fuel Bailouts seeks to mobilize young Texans and elected officials into action. The campaign calls on Texans to support prioritizing the needs of hardworking families touched by the Texas energy industry over the interests of oil and gas executives looking for a government handout.

The pledge can be found online here and calls on state and federal elected officials to:

“Climate change hurts communities of color, and environmental justice is one of the leading issues of importance to young Latinx in the Lone Star State,” said Antonio Arellano, Interim Executive Director of Jolt Initiative. “In this election cycle, an unprecedented number of young Latinx made their voices heard at the polls, and they’re turning their attention to tackling the problems caused by the oil and gas industry. Latinx demand accountability for their communities, whose children are twice as likely to die from asthma than non-Latino children. It’s time for politicians in Texas to serve the needs of Latinos — the largest growing electorate—not just the needs of fossil fuel lobbyists and executives.”

“There is a long and sad history of minority and underserved communities across Texas being disproportionately impacted by pollution and the effects of climate change,” said Rae Martinez, director of Texas Rising. “And now we have a pandemic and economic crisis, and again we see these same communities taking the brunt of the suffering. We have an opportunity to bring a measure of relief on both of these fronts. We owe it to these communities to ensure that elected officials prioritize the most vulnerable as they decide how to best emerge from this health and economic crisis.”

The health and economic impacts of COVID-19 continue to reverberate across the state of Texas, particularly in communities of color which have been disproportionately hurt by both job losses and lives lost due to the pandemic.

Even before the COVID-19 pandemic began shutting down schools and businesses, countless working families in the state struggled to breathe because they live in polluted areas, and Texas was already feeling the irreparable consequences of climate change, from extreme heat waves and hurricanes of historic magnitude to flooding and worsening air pollution that exacerbates asthma.

Investing in Texas clean energy is more critical than ever at a time when we see before us an unmistakable transformation underway. Texas is already producing more wind power than any other state, Texas solar is growing fast, and Texas power continues to be among the lowest-cost in the country.

The launch of the Gente First: Texans Over Fossil Fuel Bailouts pledge represents the first step  in urging Texas state leaders to put the interests of hard-working Texans above the interests of Big Oil. Beyond this pledge, Jolt Initiative and Texas Rising members plan to hold rallies and days of action to raise awareness about the importance of putting hard-working Texas families first.

Texas Rising, a project of the Texas Freedom Network, builds the power of a rising generation of young Texans, with an emphasis on communities of color, by advocating for change in the cities and towns where they live and at the ballot box. To learn more, visit txrising.org.

Jolt Initiative is a nonpartisan, nonprofit organization founded in 2016 to increase the civic participation and leadership of young Latinos in Texas, with the goal of building a stronger democracy and state. Jolt Initiative focuses on registering young voters and building their leadership.

Texas Rising is a project of the Texas Freedom Network