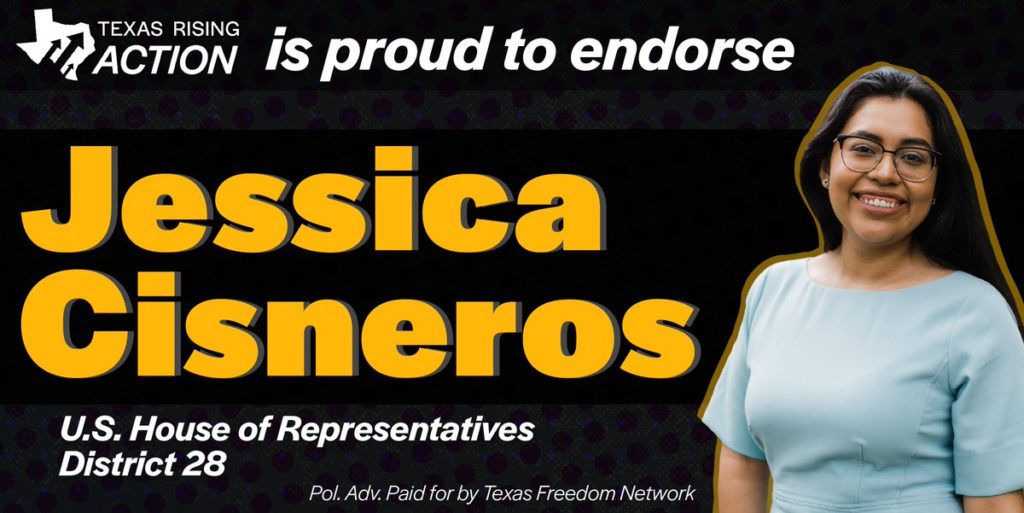 AUSTIN – Today Texas Rising Action, the Texas Freedom Network’s program for young Texans, announced its first-ever endorsement of a candidate for Congress by throwing its support behind Jessica Cisneros in the March 3 Texas Democratic primary for U.S. House District 28.

“South Texans are in dire need of a new voice representing them in Washington,” said Texas Rising Action campus organizer in the Rio Grande Valley Denisce Palacios. “Jessica is the one candidate in this race who won’t vote for the types of policies cruelly pushed by the Trump administration. She will instead be a progressive champion for young people who will defend our reproductive rights, stand up for equality, defend our immigrant communities and take action on the climate crisis.”

A native of Laredo, Cisneros is an immigration and human rights attorney, and is the daughter of Mexican immigrants. During her campaign, she has drawn a clear contrast with her opponent.

“The fact is, the current congressman for this district has become a reliable vote for Donald Trump’s policies,” said Texas Rising Action director Rae Martinez. “By some estimates, he has voted upward of 70 percent of the time with the president. Texans, especially young people, need someone in Washington who can be trusted to stand on their side.”

With members across the state and a presence on 20 college and university campuses, Texas Rising Action represents a rising generation of young Texans who support progress on issues like abortion, LGBTQ equality, humane immigration policies and taking action to address climate change.

This first endorsement of a congressional candidate comes in a critical election year when the balance of power in Washington could be decided by outcomes in Texas, where young people and a growing latino population have the power to swing elections up and down the ballot.

Texas Rising is a project of the Texas Freedom Network